A Hypothesis for a Speed Limiting Gauge Boson.

Although Einstein did his best to describe the commonality between the various facets of his theories, special and general relativity are often treated as having different causes, and there is still a common misconception that gravity has its own backwards-working force.  He was also no great fan of the peculiarities of quantum mechanics since it did not sit well with his firm interpretation of relativity.

All of this has lead to the frustration of quantum physicists who cannot resolve the tiniest scale of interest with the broad strokes of spacetime relativity.  Since fundamental particles (like photons and electrons) are the focus of quantum mechanics, there is often chatter about a particle-based theory to resolve compatibility with relativity.  However, there seems to be confusion regarding exactly what exactly needs to be quantified.

The problem with relating to relativity

In a nutshell, time dilation is simply the difference in the rate of "c" between two points in space.  As discussed in our articles on Time Dilation and Gravity, all the effects of relativity including the phenomenon of gravity are the result of time dilation.

However, around 100 years ago it became commonplace to describe time dilation using the "spacetime manifold". This graphical model implied that time dilation is due to a metric stretching of space to explain why particles appear to take more time to cross the same distance. Although graphically elegant, it requires a strict universal adherence to speed of light and is therefore not compatible with more recently observed phenomena and theories.  This includes quantum entanglement, ultra-relativistic neutrinos, and portions of the big bang theory to name just a few.

It is our position that a particle field density model for time dilation is mathematically equivalent to spacetime manifold, has more parallels in observable reality, is more compatible with quantum mechanics, and allows for ultra-relativistic properties. 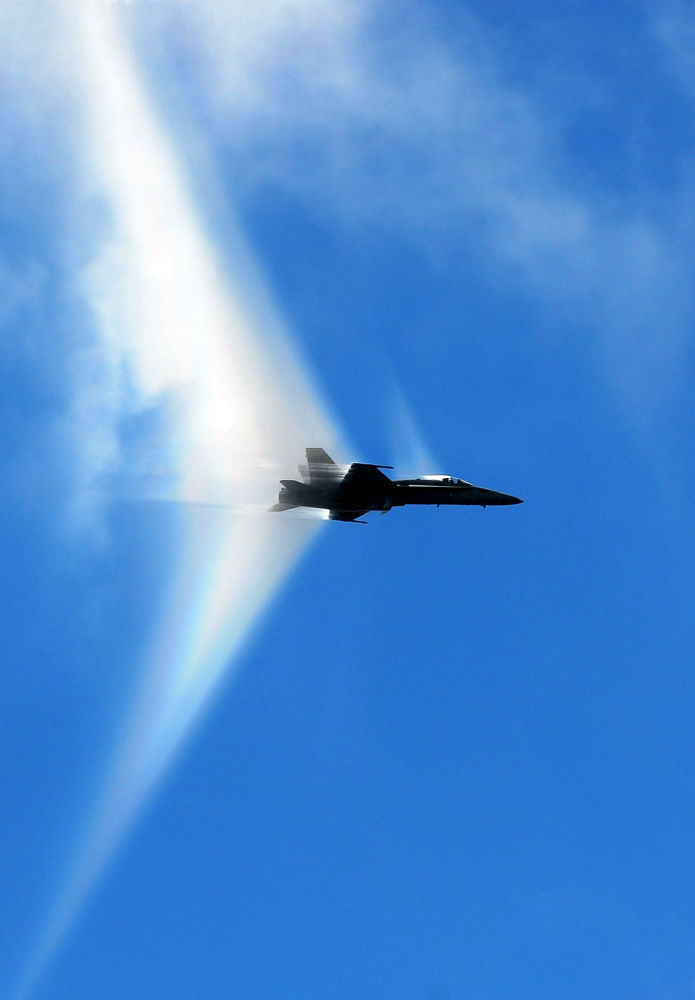 Since a definable quantity of time dilation radiates from all fundamental particles at a constant rate or field strength for a given mass or particle type (photons included), we should be able to define a virtual particle quantity as a force carrier.

The sole function of this particle is to limit the speed of all observable particles to a rate of "c".  This is due to the Celerity boson itself having a speed of "c" and impeding the motion of any particle that crosses its wavefront.  Since all observable particles radiate this wave, they are firmly limited to a maximum rate of "c" because of the time dilation bow wave.

For example, imagine a jet approaching the speed of sound.  For years there was an impassable aerodynamic effect at just under Mach 1 that did not seem to allow any plane to exceed it.

Now imagine that, instead of there being a shift in aerodynamic properties, as a jet approached Mach 1 its engines were uncontrollably slowed down simply preventing the lane from reaching the speed of sound.  That is how time dilation prevents a particle from exceeding "c".

The expand on this effect, the speed limit of a celerity field is cumulative at any given point in space.  The field emitted by a nearby mass adds to the field already emitted by the particle in motion causing a further decrease in relative speed.

Although this description of speed of light limit works just as well with gravity waves in a spacetime manifold, a particle field approach provides a quantum compatible model.

Why is a different conceptual model for relativity necessary?

Timespace is only relevant for describing motion that complies entirely with a firm universal speed limit of "c".  However, several exceptions are experimentally known to exist, and the evenness of the Cosmic Microwave Background implies a degree of event simultaneity not possible in a strictly "c" rate causality limited universe.

A particle field theory allows space to remain flat and a quanta to be assigned to a gauge boson.  This approach is fully compliant with the mathematics of relativity, quantum physics friendly, and allows for exceptional cases to exist without breaking any rules.  This answers questions spacetime simply cannot permit.

We cannot know (and may never know) the real structure of the universe.  However, for what we know currently, the Celerity Boson particle field model offers solutions to all known issues with the timespace manifold.

How can time dilation be caused by a radiated particle field?

The influence of time dilation at a distance follows the inverse-square law just like all known radiated particle and energy sources.  This geometric fact implies a similar means of transmission.  In short, time dilation (and therefore gravity) has all the properties of being a particle driven effect mathematically comparable to light radiating from a light bulb.

Although the mechanism of spacetime has been the more popular concept over the last 100 years, time dilation's perfect conformance to inverse-square law is highly coincidental.  If time dilation has a unique functional mechanism, why would it follow the same power dissipation slope and propagation speed as conventional radiated field?

The Celerity gauge boson model of time dilation provides a solution for all affected scenarios:
It provides intuitive conformity to inverse-square law.
A mechanism for enforcing "c" speed compliance for itself and other particles.
An assignable quanta with a possible wavelength.
Quantum entanglement and other super-luminous phenomena would not violate relativity in this model.
Fully compatible with modern quantum mechanics.

How does dark energy or dark matter work in this hypothesis?

In short, it doesn't.

All hypotheses related to dark energy are attempting to confirm Hubble's assumptions from 100 years ago.  To prove that the universe is metrically expanding has always required a yet unobserved cause. However, there is no observable evidence for dark energy, and any study to prove its existence has been inconclusive at best.

How does this theory allow for faster-than-light information to be possible.

The Celerity or c boson hypothesis is a particle that also has a limited interactivity.
Like a photon, it does not interfere with itself.
Unlike known particles, it cannot be interfered with or manipulated by any means currently known.
However, its wavefront impedes the movement of all directly observable particles.
And since all directly observable particles radiate this Celerity boson field, no particle can exceed the speed of the c boson which itself is at the speed of "c".

Being that this is a particle field theory, it is also implied that at a small enough scale/high enough energy that there may be a granularity to the field.  That could mean particles with sufficient energy might exceed the speed of light to some degree.
There is evidence that shows neutrinos exceeding "c" in some experiments.  Although this is a clear violation of spacetime manifold speed limits, if time dilation is a particle field there is no violation.  The high energy neutrino wavefront would be "small" enough to go between some of the celerity bosons from other sources diluting the impact of time dilation on the rate of that particle.

And what of particles that do not interact with the "c" boson at all?  Such a particle would suffer no speed limiting effects of time dilation and therefore have potentially limitless speed.  Those particles would also be undetectable directly by any known method and would not contribute to time dilation or mass of the universe in any way.
Non-relativistic (NR) particles like these would transfer quantum information like in the case of an entangled particle pair.
At the moment the state of one particle is resolved, a virtual NR particle mirroring its angular state propagates out at infinite speed and triggers the entangled particle into alignment with it.
Again, this would be in no violation of relativity as it would simply be a virtual particle that does not interact with the c boson field and therefor experiences no time dilation.

To learn more about the Celerity Boson, contact us at questions@WhetScience.com.

Site was built with Mobirise