Full of nothing yet nearly impenetrable.

Although there are several kids of hadrons with differing properties, I've selected 3 features common to all of them worth pointing out.

1. Hadrons are composed of elementary particles.

Again, a hadron itself is not a solid particle but is a collection of elementary particles. These quarks and gluons are all indivisible, wavelike, pointal particles moving at light speed. Therefore, a hadron is a compounded version of all those characteristics.

For example, hadrons still have wave-particle duality properties and can still produce wave interference results in the double-slit experiment.  However, being that the hadron is a bonded set of multiple particles, the degree of indeterminate wavelike movement for a hadron is a fraction than that of an individual particle. 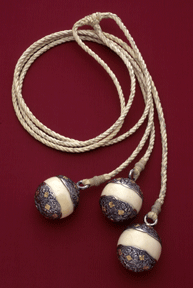 2. Hadrons have a defined volume.

The first property of a hadron that separates it from an independent fundamental particle is that it occupies space. But why is this the case if all of the parts of the hadron have no volume?

Consider the Boleadora: The 3-ball rope thing used to tangle up a target. Although its parts don't take up much space, when properly launched the diameter of the weapon in flight is a very well defined space you want to stay out of!

A hadron is much like a boleadora. The quarks are the “balls” with gluon “rope” lengths keeping them corralled within a specified range.

Where a boson is a bit different than an antique weapon is that the quark "balls" are always moving at the speed of light and randomly, and the gluons are somewhat elastic. Add a dash of wavelike particle motion and a scoop of indeterminate location and you have a firmly defined spherical area. Although a boson is nearly "empty" it is impassable by anything but the smallest and highest energy fundamental particles lucky enough to miss the flurry of movement inside. It is like passing an object through a box fan on its fastest setting: If the object is small enough and well timed it might make it, but if it isn't...

For research purposes, scientists take advantage of the boson's well defined area. Electrons carefully aimed at hadrons can pass straight through like a well timed projectile through a spinning fan, and they are sometimes deflected by the quarks inside.

However, particles with longer wavelengths and other hadrons can never pass through.  Hadron colliders (also called particle accelerators) like CERN are designed for this very purpose to, well, collide hadrons directly into each other with as much velocity as possible. It is interesting to think that to smash the smallest possible objects into each other we have to build the world's largest and most expensive scientific instruments!

So if a hadron is comprised entirely of particles moving at the speed of light, then how come it can move at different speeds or even stand still?

Not unlike any number of Three Stooges episodes, you get nowhere fast by moving in every direction at the same time!  The parts of hadrons move so randomly in every direction that the average velocity in any direction averages zero. Therefore, the speed of a hadron is dependent upon being pushed off balance.  Once put into motion, it tends to stay in motion and vice versus.

That makes the hadron the smallest structure that complies with all of Newton’s laws of motion.

To learn more about hadrons, contact us at questions@WhetScience.com.